Population ageing is one of the most discussed global phenomena in the present century. Due to the developments in medical science from the middle of the last century, life expectancy of the people has increased from 42 years in 1960 to 69 years in 2019 and may go up to 80 years in 2050 as shown in the diagram(Fig-1), resulting in population explosion and increase in the population of elderly people. Countries with a large population like India have a large number of people now aged over 60 years or more. The population of elderly people has tripled in last 50 years in India and will relentlessly increase in the near future. According to census 2001, older people were 7.7% of the total population, which increased to 8.14% in census 2011. It is projected that population of elderly people will grow to 10% of the total population in next census in 2021 which will be approximately 133 million. The government recently stated in Parliament that India will have 34 crore people(20% of total population) above 60 years of age by 2050 that would be more than the total population of the US(Fig-2). The numbers are similar to those projected by other international agencies like UN and Help Age. The agencies had projected the 60-plus population in India to rise to nearly 32 crore by 2050. Moreover it is found that life expectancy of female is more than the male by at least 3years. Which means there will more elderly female in the years to come compared to male. 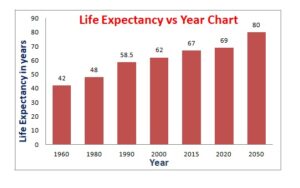 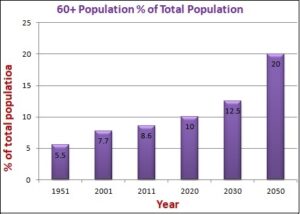 As per the 52nd round of survey of National Sample Survey Organization, nearly half of the elderly are fully dependent on others, while another 20 percent are partially dependent for their economic needs . About 85% of the aged had to depend on others for their day to day maintenance. The situation was even worse for elderly females.

It is the duty of a civilized society to respect and care the elderly people. But due to fast socio-economic transformations in the society in recent years the society is diverted from the traditional ways of mutual respect among generations. The senior citizens, referred to as elders, face many problems as a consequence of these social transformations. This is reflected in the transition from the traditional ways of life to modern patterns, which require many compromises and adjustments in the daily life style. Those who can adapt themselves with such compromises can live a peaceful life with their children and those who are not comfortable with such compromises become odd for them. Such children with limited resources consider the income less elderly as burden and sometimes abandon them. Sometimes the parents do not like to leave their native place or not comfortable with the working environment of their children who are employed in other countries or remote places and prefer to stay alone. With limited number of children (one or two) it has become a normal practice for most of the parents now. The emerging demographic profile and socio-economic scenario of the country indicate that matters will worsen drastically in the near future. There is an upward trend in the living arrangement pattern of elderly staying alone or with spouse only from 9.0% in 1992 to 18.7% in 2006. Family care of the elderly seems likely to decrease in the future with the economic development of the nation and modernization.

With Government of India spending less for social security of the elderly, they are most vulnerable due to present socio economic changes. Though 71% of the elderly are living in rural areas compared to 29% in urban areas, the elderly in rural areas are much secured compared to their counterpart in urban areas due to the social attachment of the people in the rural area. In urban areas the elderly are much more isolated and had to rely primarily on hired or paid service for their domestic needs. The reliability of the hired service has decreased with time and thus it is not safe for elderly couples or a single persons, male or female to live alone due to security and health care reasons. Recent studies have found that loneliness has negative impact on the health of the elderly people leading to insomnia, hypertension and high blood sugar and many more. The feeling of sense of neglect is another factor contributing to these problems. AMARAWATI is a vision of ABVSAS and it is not just an old age home, but it will be a solution to all such problems of the elderly people.

Amarawati will be developed to a village within a village far from the hectic activity and chaos of the urban area. It will provide a natural environment free from all types of pollution and hectic activity of the urban area. It will provide sustainable transitional living as an option for individuals to maintain independence and self respect. There will be ample scope for the elderly to keep themselves busy in different activities either as spectator or as an active participator in different activities and schemes. There will also be scope for the elderly in interacting with visitors and people working with different schemes to relieve themselves from loneliness and boredom. There will be provision for 150 elderly people initially (60 male and 90 female) belonging to North Eastern region irrespective of class, caste and religion.

The facilities planned for Amarawati are:

In addition the inmates will be able to enjoy the beauty of nature within the campus by visiting different sites with their companies or taking part in different activities if they like and relieve themselves from stress and boredom.